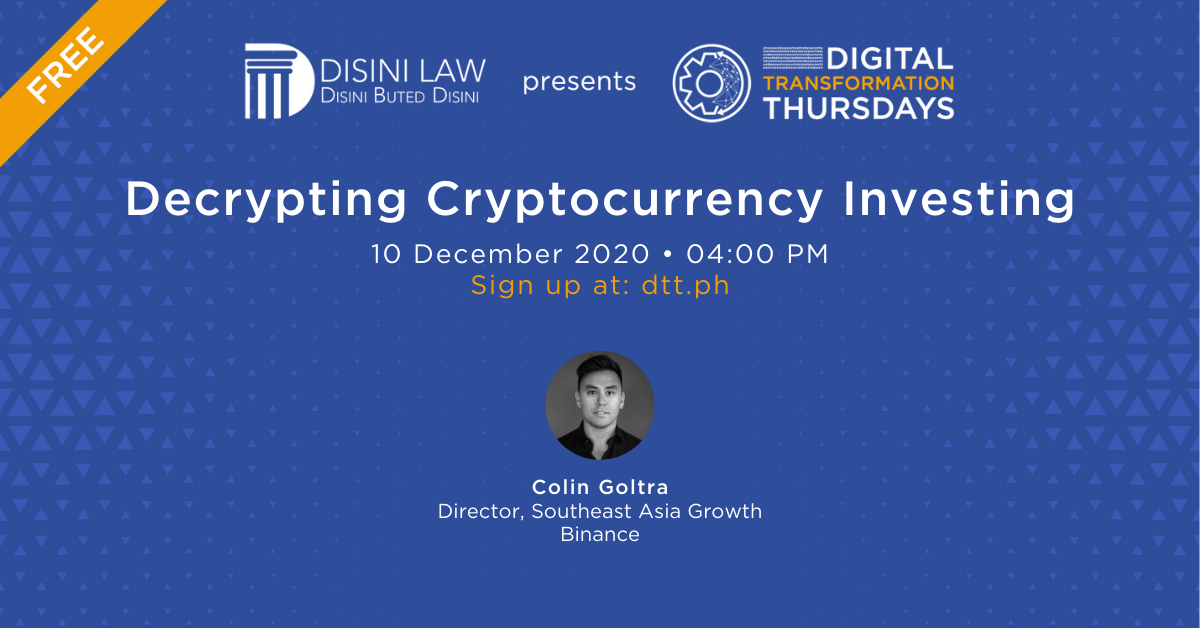 On December 10, 2020, Disini Buted Disini hosted a webinar entitled Decrypting Cryptocurrency Investing as part of the webinar series Digital Transformation Thursdays (DTT). This episode discussed investing in cryptocurrencies from the perspective of an average consumer.

Unlike the usual lecture setup in the past DTT webinars, this session was held in the form of a conversation between Atty. JJ Disini, Managing Partner of Disini Buted Disini, and Colin Goltra, Director of Southeast Asia at Binance. Their discussion started with the creation of Bitcoin back in 2009. Goltra discussed how Bitcoin began and how and why the Bitcoin system works. He presented as an analogy the image of people dealing in a market fair, where instead of just one person taking down the details of completed transactions, everyone does it. As a result, many people would have copies of the details of the transactions, and in turn, these details would be difficult to alter, forge, manipulate, or tamper with.

Atty. Disini and Goltra also described Bitcoin as digital gold. They explained that Bitcoin is not really something used in daily transactions; instead, like gold, Bitcoin is more of an investment. They admitted that Bitcoin transactions can be inefficient, but what makes up for this inefficiency is its security. Ending the discussion on Bitcoin, Goltra mentioned that its scarcity, security, and wide global acceptance are factors that make Bitcoin a great way to unplug one’s wealth from the financial system.

Their next point of discussion was another popular cryptocurrency called Ethereum. Goltra described Ethereum as more ambitious than Bitcoin because “they want the same thing that Bitcoin has, which is a distributed ledger, but they want the tokens on that distributed ledger to have more functionality.” Likewise, the concept of Decentralized Finance was also briefly mentioned. Throughout the discussion, a few sample websites and applications dealing with cryptocurrency were presented, and their functions were explained.

As his final words, Goltra reminded the viewers to be very careful and to do their own independent research. He told the listeners to ask what people actually do with their own money and why they do it instead of simply asking for investment advice. “Be careful of people giving advice that they wouldn’t take themselves,” he concluded.

The recording of this session can be viewed on Facebook through the Disini Law page and YouTube channel.


Thank you for visiting! To help improve your browsing experience, this site may use cookies, web beacons, tracking pixels, and other tracking technologies while you access the site. By continuing to browse the site, you are agreeing to our use of cookies. For more information, please read our Cookie Policy.
Cookie settingsACCEPT
Manage consent