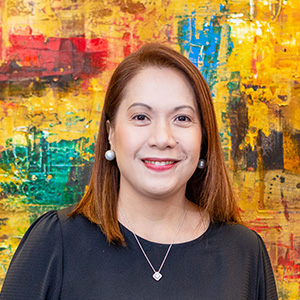 At present, Owens heads the general corporate practice of the Firm and is simultaneously the legal counsel for UP Open University, where she authored and taught a course on Law and Multimedia.

Her fields of expertise are banking and general corporate law.

After graduating 5th of Class 1993 in the UP College of Law, Owens obtained her initial training in a top Manila law firm where she concentrated on Corporate Law.

She was subsequently given an opportunity to assist in the successful political campaign of a Philippine Senator, while working as legal counsel for the State University.

Owens returned to private practice by working as in-house counsel for a leading broadcasting company and was involved in various legal transactions involving entertainment and broadcasting. She also headed the legal department of a group of companies belonging to a prominent figure in the business community and was involved in different corporate consolidations, reorganizations, mergers and acquisitions and back-door listing. Immediately before joining the Firm, Owens worked for two of the largest banks in the Philippines, and also to a local subsidiary of the biggest bank in Spain.

At present, Owens heads the general corporate practice of the Firm and is simultaneously the legal counsel for UP Open University, where she authored and taught a course on Law and Multimedia.

Her fields of expertise are banking and general corporate law.

University of the Philippines College of Law,
(LLB, 1993, Dean’s Medal)